How to create a guaranteed killer email campaign, it’s so easy!

As a marketing specialist, you are the master of juggling a multitude of tasks at one time.  From adverts to social media, you do it all during your busy day.  Email still remains top of the list for ways to reach customers in this digital age so one of your biggest challenges is creating that killer email campaign that converts.  To help you along, here are a few ideas and examples to inspire you:

At one time, personalising an email meant using an algorithm that inserted the person’s name or their email username at the beginning of the email and that’s the job done.  But modern personalisation has moved on to a whole new level.

For starters, how many people have wacky user names for their accounts, often set up when they were teenagers and then swiftly forgotten about?  Sending an email to ‘Miss Party Girl’ doesn’t really do much for the credibility of your business and probably just causes the recipient great embarrassment – instant delete.  One study found that 95% of people responded negatively when an email called them by a silly name.

However, many of those customers would react far better to a personal message that was actually relevant to them.  Opticians Warby Parker are a good example to look at – their email featured a prominent date when the customer’s eye test was due and prompted them to make an appointment.  It also included two easy links to their men’s and women’s glasses sections for some shopping. 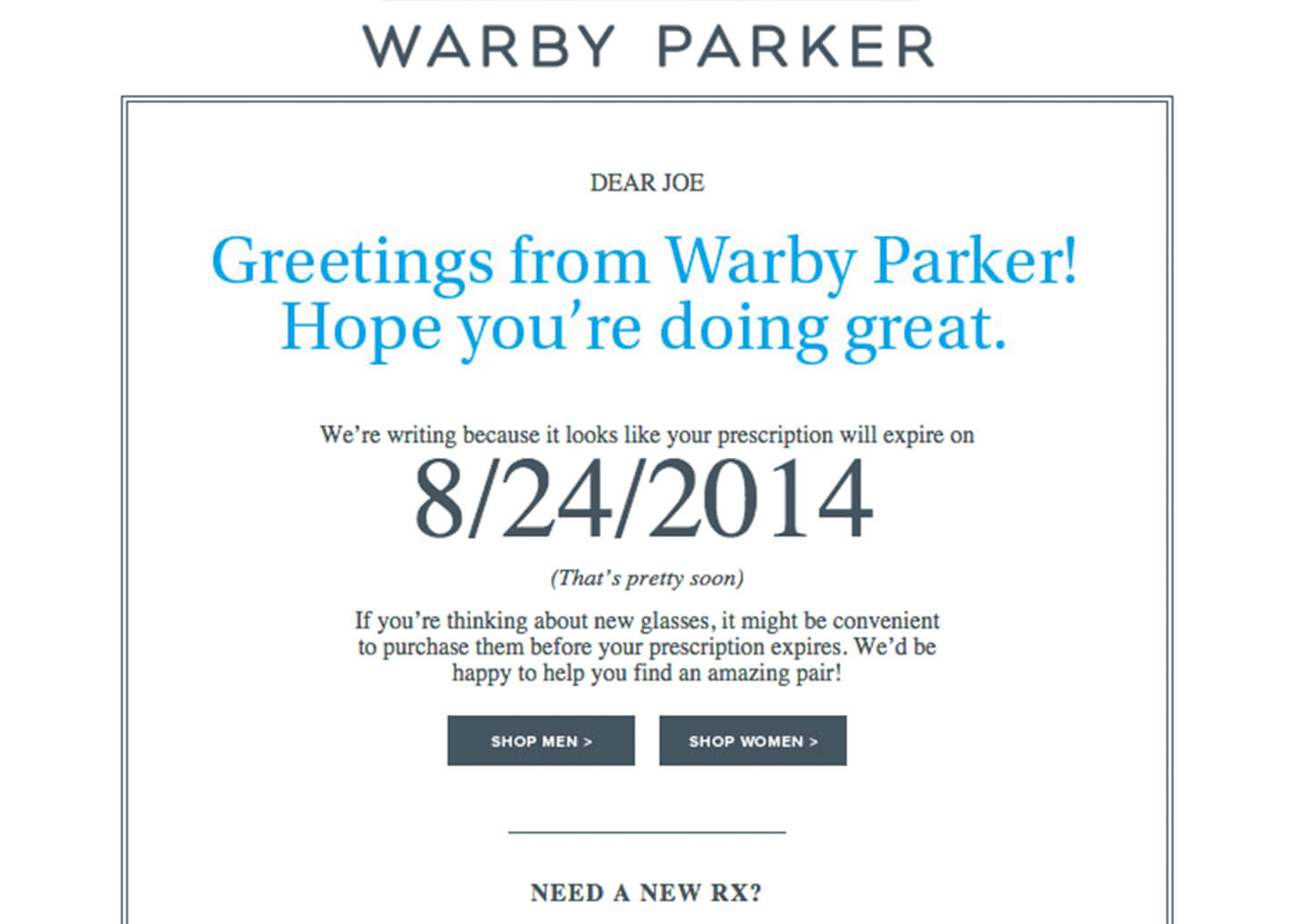 Takeaway: Could this email have been improved even further by only specifying the gender of the recipient? As a viewer if you only have one option and it’s laser targeted, you can only go one route – straight to the sale! (This obviously relies on you having the gender data to display the correct button – all totally achievable using merge tags)

Getting right to the subject

The subject line is your chance to grab the customer’s attention and needs to be used carefully.  What it doesn’t need to be is very long – studies have shown that subject lines of 49 characters or less have a high open rate while even as little as 10 characters have a 58% rate of being opened and read.

President Barack Obama’s team captured this idea perfectly in his killer email campaign to become president.  They often sent emails with the subject line being ‘Hey’ or ‘Wow’, grabbing the reader’s attention and making them curious to see what was in the rest of the email.  Not only that, they are quick!  Time is very important to marketers and anything that makes for a quick and effective solution to a problem is always welcome.

Of course, not all of the would-be president’s email subject lines were quite that short every time.  Another way to increase the chance of your email being opened by 14.68% is by including the recipient’s name in the subject line.  And if you need to get a little more information across to customers, then those same studies show that if you keep the characters to under 70 in number, you still have a good chance to engage the customer and get them to stay with you.

We’ve all felt the temptation – you have a great subject line and a touch of personalisation so now you want to cram as much information into that email as possible.  You try to tell the customer everything they need to know so you don’t have to send another back-up email with more information in a few days.  Just stop right there!

When creating a killer email campaign simplicity can be the best policy when dealing with emails, despite the temptation to make the most of the customer’s attention while you have it.  Pick a single message, with a few complimenting images and a concise call to action – keep it simple. Here are some great examples of brands using simple, clean design to emphasis their CTAs.

Stitcher whilst creating a newsletter tailored to the readers preferences, have also designed it to be responsive. This version, taken from a smartphone has been designed with large clear CTAs making it easy for you to click through and listen. 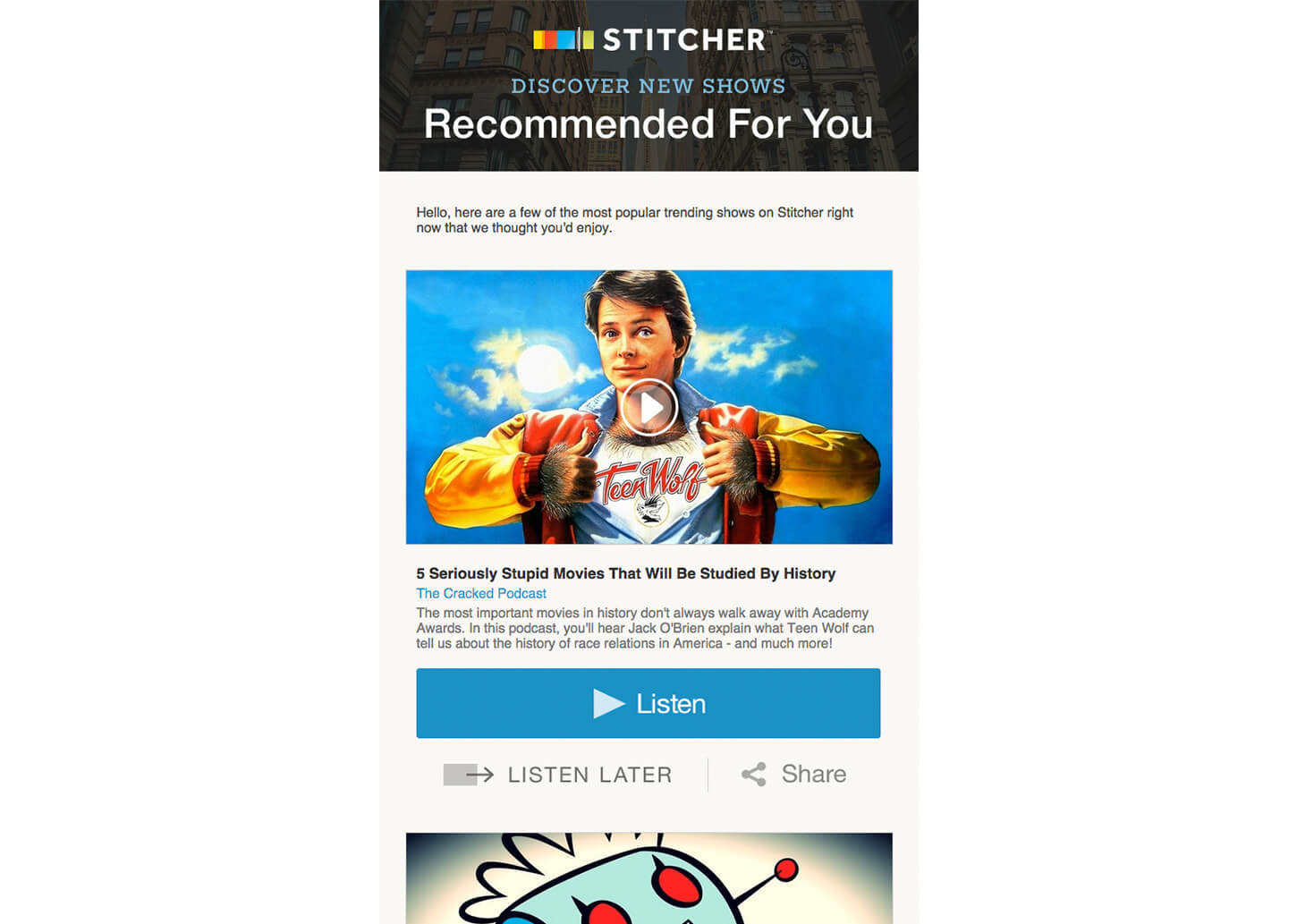 Here Frye make it very clear whilst that they’d like you to complete their survey. With a question, incentive and link, in that order, drawing you into the content of the newsletter. 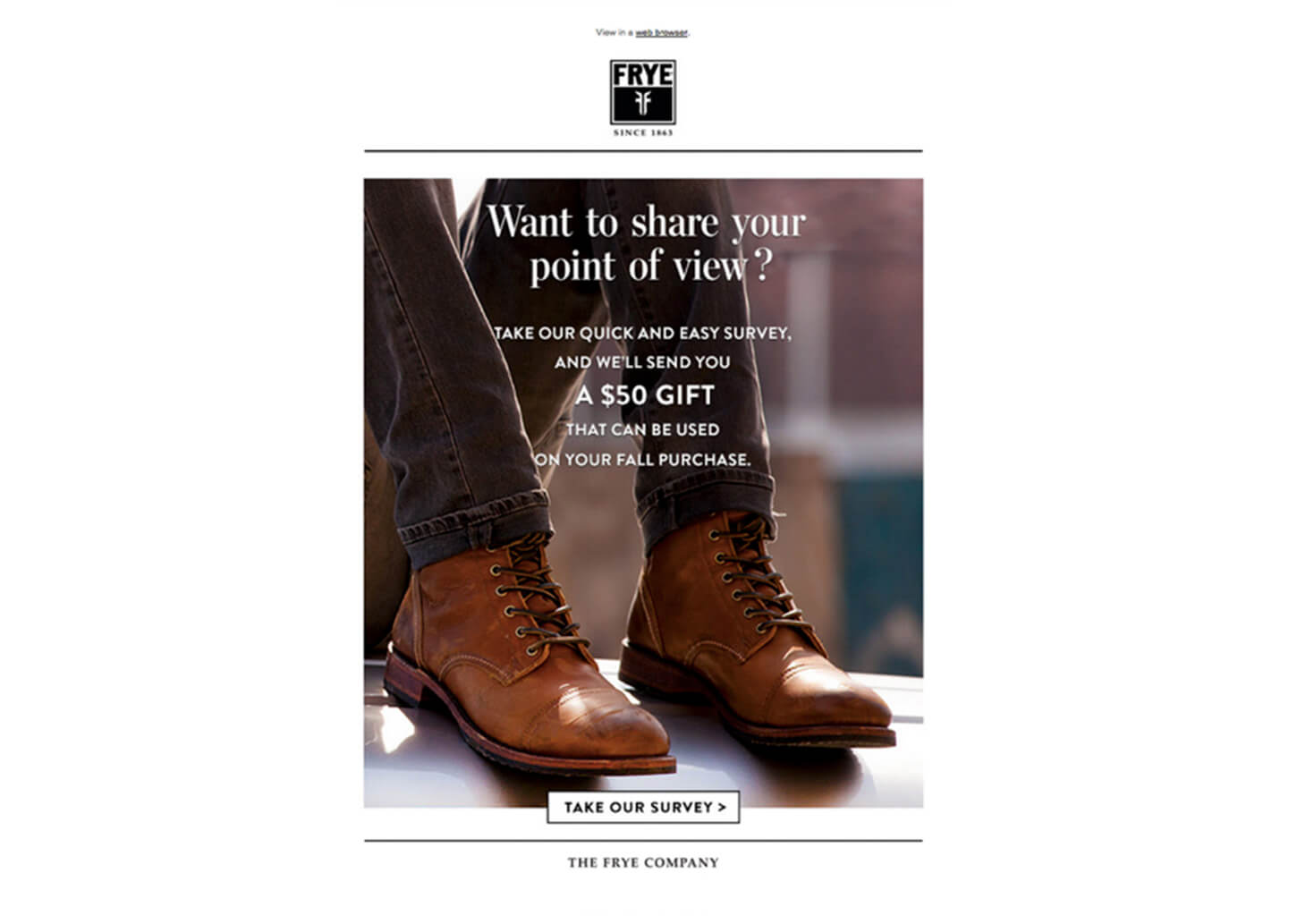 With last year’s big change from Google focusing on the mobile-friendliness (responsiveness) of websites, most companies have taken stock of their sites and ensured they work across every device possible.  But have you had this check done with your email marketing software?

According to stats from Litmus, the number of emails opened from a mobile device reached its highest point in April 2016, with 56% of emails sent being opened either on a smartphone or tablet.  While the following month saw a slight drop of 2%, the future trend is clear – a killer emails campaign needs to respond perfectly to every device that it’s are opened with.

There are also elements within the email itself that can help with a killer email campaign as well as responsible software.  Using larger font sizes is one idea while ensuring that the call to action is obvious is something that applies to all emails.  However, with the CTA on mobile devices, it can often be best to position it above the fold so no scrolling is needed to reach it.  Also position any tappable elements in the centre of the screen to ensure they are easy to use on a smartphone.

All in the timing

So you have an killer email campaign that will convert, that looks great, has an eye catching subject line and a clear CTA as well as responding to any device it is opened with.  However, all of this can fall flat if you don’t take into account one final tip – the timing.

According to the latest batch of studies from the likes of MailChimp, there are clear times and days when sending emails are best.  For starters, Tuesdays are the best day to send your main email and if you are doing a two-a-week strategy, follow it up on a Thursday. Saturdays and Sundays have a higher opening rate but also a much lower send rate so this figure is a bit unreliable.

And when during that day should you send it?  One very successful time is 10am, people might be on their early morning break or will have just finished their first batch of jobs for the day.  They check their emails for a moment and you can catch them in a receptive mood.

The second best time will be a surprise to many people – between 8pm and midnight.  Think about your own schedule – you come in from work, feed the family, get the kids off to bed after finishing their homework and then you get a chance to sit down.  You might be watching the TV or having a glass of wine or beer.  Then you check your emails.  You might do the same again before you go to bed – just in case you missed anything.  Hence this window is the other best time of day to send those emails if you want to grab people’s attention.

Creating a killer email campaign, or in other words an email campaign that converts and that customers are willing to engage with isn’t about one single thing.  Like most of the other jobs you do, it is about balancing all those elements to get the perfect end result. And remember, what works for someone else might not work for your business – so you need to test, refine, and keep testing.

We’ve done the research so you don’t have to: